In fact, from school celebrations to urban publicity, drone light shows have become "regulars" in our lives. The rotor of the drone rotates, flexibly changing the pattern in the air, making the tight urban space also climb into a new landscape. Indoor and outdoor UAV formation system supplier Highgreat believes that these drone performances flashing back over the city not only attract people's attention, but also take pictures of consumer culture and festival memories, inspire a city's "nighttime economy", and reflect the light of technology in an era.

Nighttime economy can improve the utilization rate of facilities, increase social employment, improve consumption level, and promote regional development. It is a "new blue ocean" for urban consumption. The "14th Five-Year Plan" and the 2035 long-term goals were announced in various regions, and "nighttime economy" has also become an important part of driving economic development in various regions.

The drone show also makes the night economy not only stay on the tip of the tongue. As early as 2019, Changsha issued the "Implementation Opinions on Accelerating the Promotion of Night Economic Development", which clearly proposed to create urban night festival brands such as "Light Festival" and "UAV Show". Today, drone shows have become the norm to enrich night life. 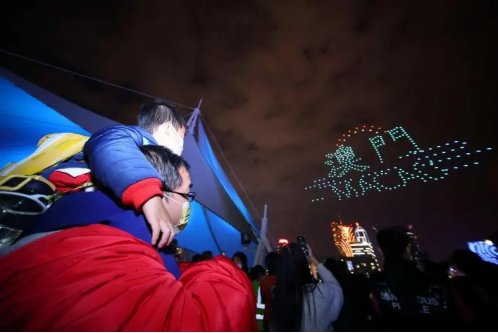 Under the background of "carbon neutrality", the drone show, a low-carbon and environmentally friendly performance form, also happens to meet the trend of the times. "UAV performance not only has no pollution emissions, but also can be used repeatedly." Indoor and outdoor UAV formation system supplier Highgreat believes that, whether in terms of shape, style, volume and other elements, or in terms of economy, environmental protection, and safety From a perspective, drone shows are expected to replace fireworks in the night sky economy.

Indoor and outdoor UAV formation system supplier Highgreat is one of the company representatives who participated in the formulation of the "Shenzhen Standard" and has been deeply involved in the formation performance industry since 2014. It is understood that, as a leading enterprise in the field of drone formation, Highgreat has initially formed a professional drone production and manufacturing base from independent research and development, intelligent manufacturing to application landing. The establishment of the UAV production and R&D base also provides more possibilities for UAV formation transformation and creative realization.

From "performance" to "additional benefits", broaden the application scenarios of drones

As an indoor and outdoor UAV formation system supplier, Highgreat does not stop at formation performances, but also applies this advantage to the field of education. It is reported that the advent of the educational formation drone Fylo EDU in 2020 has aroused great repercussions in the educational programming market, and has successively appeared in major technology competitions across the country.

Regarding the future development direction of the industry, indoor and outdoor UAV formation system supplier Highgreat wants to open up more possibilities of "formation technology+". Based on a specialized manufacturing base, Highgreat provides more specialized and customized services for the entire UAV industry while continuously improving the performance of its products. In the future, he hopes that more other technologies can be integrated, so that the entire formation technology can be applied to more industries and directions.